The Super Bowl of Bots: Campaign Optimization Techniques that Win on the Field

Performance marketing actively uses data feedback to optimize a campaign, both in terms of impact and expense. Measuring and analyzing actions like clicks, leads and sales makes it possible to refine a campaign, focusing on what works and improving (or eliminating) non-performing features. Which search keywords worked? What geographic areas produced results? At what time of day? Which genders 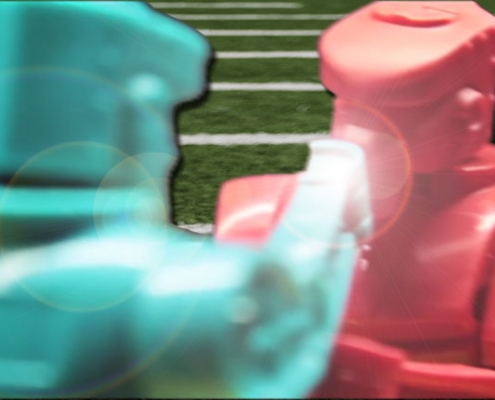 responded? How old were the people you reached? Which placements earned clicks? Tweaking parameters in a campaign allows you optimize the performance and improve cost effectiveness. The result will be a better focused, better performing campaign.

For best results, the process is repeated often, with data feedback informing refinement to any and all of the parameters that impact performance in the campaign.

This blog post aims to illustrate what’s really happening in and around a campaign, both in terms of drivers that marketing controls and the outside factors that interact with the campaign to affect its real success. We’ll explain how to identify problems in a campaign, and how – if armed with data and an understanding of the ecosystem – these problems can be solved to optimize marketing expense.

Sounds like a battlefield, right? Well, in the spirit of the imminent Super Bowl, let’s liken it instead to a game of American football!

To visualize a campaign and its clicks and leads, we’re going to model them across the 100 yards and two endzones of a football field. In the diagrams that follow, clicks are represented as circles and leads as st

ars. You want to reach real sales from real people, right? Yes, so the objective is to get into what we’re calling the Human Endzone. And the closer you get to that human touchdown area, the more likely you are to achieve real conversions to sales. A well-constructed campaign is optimized to get there.

In the analysis that follows, each illustration will contain the exact same playing field so it’ll be easy to compare the outcomes. We’ll lay out competing scenarios, first, and then compare the corresponding numbers. As you’ll see, proper fraud detection is a vital part of the strategy to reach the endzone. Ready? Set. Hike!

Campaign without Fraud Detection
The campaign without any fraud detection is shown to the left. Starting at the bottom in what we might think of as the game’s kickoff we see a campaign starting without optimization. Here you have already set your target audience according, let’s say, to gender, age and geo-location and maybe, if applicable, search keywords. The illustration shows that clicks and leads are generated throughout the field, and they are evenly distributed. The only metric you have is the likelihood of conversion.

In the next image, which corresponds to the First Quarter, you start optimizing to eliminate the worst performing parts of the campaign. That will eliminate some clicks and leads but as they’re the ones furthest from the endzone they probably wouldn’t have been converted anyway.

Through Q2, no leads and clicks are happening in the eliminated parts of the field, and again that’s a good thing! At the same time, the middle of the field has become more crowded, with more clicks and more leads! Unfortunately, from here you still need a Hail Mary to get in the endzone! Or in our jargon, this part of the field underperforms compared to the area closer to a touchdown, so a new optimization is required.

Another round of optimization in Q3 eliminates the middle part of the field and thus the least performing clicks and leads of the campaign.

By the Fourth Quarter, all the clicks and leads have moved to the tiny area still in play. By the final whistle any further optimization would only lower the volume and not increase the quality.

Unfortunately, once the campaign has finished and its results reviewed, it will be clear that the campaign performed poorly, with each optimization having increased the average Cost per Acquisition (CPA) and Cost per Click (CPC), where a better performing campaign would have seen them fall.

Campaign with Rudimentary Fraud Blocking
The same campaign is considered again, but now we have added the ability to see which clicks and leads are generated by bots, click farms and sweatshops. The illustration at the bottom shows again that clicks and leads are generated throughout the field at kickoff, but many of them are now tagged as fraudulent (as marked in red).

As this game progresses, you realize you have a more cunning opponent – or a team of them! Now as steps are taken to optimize the campaign, the other side changes their tactics, too, which is exactly what happens when bots, click farms and sweatshops adjust their strategy in order to continue to generate clicks and leads that earn them their bucks.

By Q2, another problem emerges, namely that the fraudsters have adapted their game plan, and have returned more advanced than before! Fraudulent clicks and leads have reappeared and moved to the middle part the field. This has affected the statistics of this part of the campaign and after further analysis you again narrow the campaign to eliminate the noise.

Another optimization in Q3 eliminates most of the fraud but also dramatically reduces the scope of the campaign. And by the final whistle, the fraudsters have infiltrated the campaign again, and are occupying the area closest to human endzone. But will they ever convert to a sale? No, of course not, but they will get affiliate attribution fees.

This is the endgame for most on-line campaigns at present, with bots and other nefarious forces mingling with human traffic, and doing so with such sophistication that they can only be spotted in the earliest stages. All of which makes for under-performing campaigns, plagued with fake leads and even the risk of litigation.

Campaign with Intelligent Fraud Detection
The same campaign is again shown at the bottom, but now the marketing team have proper fraud detection in place from the start of the campaign. Armed and are able to see which clicks and leads are generated by bots, click farms and sweatshops.

As before, at kickoff we see clicks and leads generated throughout the field, with fraudulent clicks and leads identified and marked red. As you’ll see, in this matchup, the game plays out very differently.

Why? Because intelligent fraud detection allows you to focus on your human interactions, and to optimize with them in mind, without narrowing the campaign to avoid the other noise. What about the bots and click farms, you ask? Well, you don’t have to worry about them because most affiliates accept when you refuse to pay for fraud.

But you have to have implemented proper fraud detection to be able to reliably identify fraud.

Reoptimizing again in the Third and Fourth Quarters, the impact is even clearer. Undistracted by bot traffic, your campaign reaches the widest possible opportunity set, with the human endzone and conversion to sales immediately ahead. The last stage shows a very focused campaign with a high percentage leads compared to the number of clicks, and a high probability of conversion to a sale.

The illustration also reveals that the bots, click farms and sweatshops have not evolved, because they only evolve out of necessity.

Comparison of the Two Campaigns

The table below compares the first described campaign without any proper fraud detection and the third campaign with proper fraud detection. The table will show only the number of clicks and leads you are paying for. The table only contains overall numbers without the metric of likeliness. Against the backdrop of the illustrations, the numbers below show clearly that the ability to optimize your campaign on your human audience only – without also optimizing to eliminate bots – does greatly improve performance.

What is the takeaway? That campaign performance can and should be optimized to improve performance, and that can be accomplished without incurring fraud-related costs. How?

If the performance of your campaigns does degrade over time and you are wondering why that happens, you might ask yourself: Do I optimize my campaigns incorrectly? Or is my current fraud detection tool missing the continuous evolving fraudulent traffic?

This website uses cookies to improve your experience while you navigate through the website. Out of these cookies, the cookies that are categorized as necessary are stored on your browser as they are essential for the working of basic functionalities of the website. We also use third-party cookies that help us analyze and understand how you use this website. These cookies will be stored in your browser only with your consent. You also have the option to opt-out of these cookies. But opting out of some of these cookies may have an effect on your browsing experience.
Necessary Always Enabled
Necessary cookies are absolutely essential for the website to function properly. This category only includes cookies that ensures basic functionalities and security features of the website. These cookies do not store any personal information.
Non-necessary
Any cookies that may not be particularly necessary for the website to function and is used specifically to collect user personal data via analytics, ads, other embedded contents are termed as non-necessary cookies. It is mandatory to procure user consent prior to running these cookies on your website.
SAVE & ACCEPT