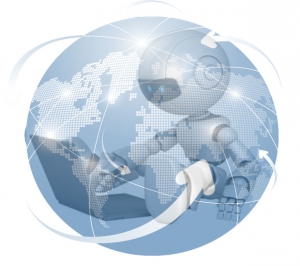 A lot of clients ask us whether paid traffic from search engines like MSN, Bing, Google and Yahoo has a fraud problem as well. Some even wonder if they can get around bots and other fraud by being very specific – like targeting only specific geographic areas. You might have these questions, too, so we’d like to walk you through how geo-targeted search engine traffic looks on your site and in your lead generation funnel.

To tell this story, let’s use an example of an imaginary company that sells medical devices to consumers. We’ll use actual data we collected in August 2019, but the company is made up just for this article. Our pretend company buys search engine ads with a relatively high cost per click to make sure consumers in different areas see their product, click on the link AND, most importantly for this company, are taken to the landing page for the company’s location that is nearest to them. With over 1200 locations, they can be pretty specific because they want their leads to see how easy it will be to buy from them close to home.

It’s a sound marketing set-up, and each location’s page is informative, and includes their specialty, address, opening hours and even a calendar to make an appointment.

So the process is pretty simple – to arrive on a landing page, a human searches for the product, sees the result and clicks on a result. In our example, a human either leaves or makes an appointment for measurements. If they make an appointment, they usually pick a store that is very close to them and not on the other side of the country.

Let’s look at 8 different stores and their traffic from search engines in August 2019. They each get a decent amount of traffic and are all pretty far away from each other, so they make our point well. 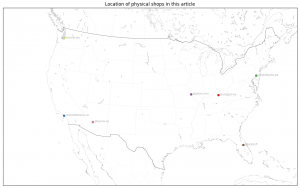 Because the thing is, not many people realize is that bots use search engines the exact same way as humans in order to make themselves look human.

When we map out the internet location versus the physical location of leads for this company, it looks like this:

That looks pretty good. And if we weren’t careful, we might think our company is fine. But now let’s look at the percentages of bots vs humans in our paid search engine traffic. 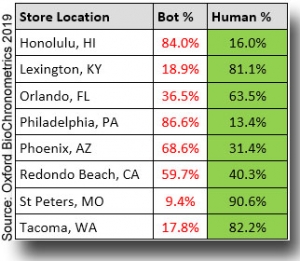 Now the situation is not as pretty! But look at how different the bot rate is. The percentages of humans and bots are completely different for each store. Some stores have almost exclusively bot traffic, others only have human traffic. You also see that pretty much all the humans came from the US visited the sites, but bots came from all over the world. If you’re this company, you don’t really care if the bot came from Bangladesh, France or the US, but it is useful to see even here that your geo-targeted search engine traffic did not work for you. 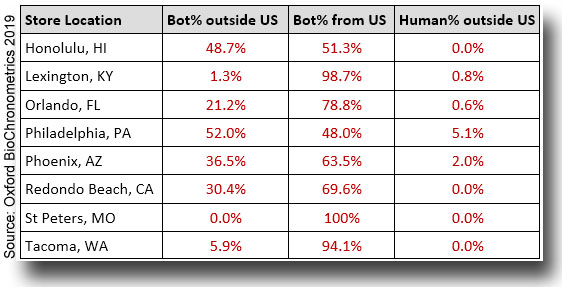 So let’s look at our human traffic, because those might really be leads. When we look at a map to see where humans are searching from, we find something troubling: many humans are searching for a store and end up at the landing page on the other side of the country. Take a look at the maps in the slider below – they all have the same scale so you can compare.

The large red dots represent bot queries. These dots are located at the same places for Honolulu, Philadelphia, Phoenix, Redondo Beach and Orlando. It turns out that these locations are data centers and have one or more bots executing search queries. These bots sometimes exclude the state and city in the search query, but end up at the landing page of multiple specific stores. This proves that these bots are executing these queries on behalf of their owner and not benefiting the stores which have to pay for these leads. 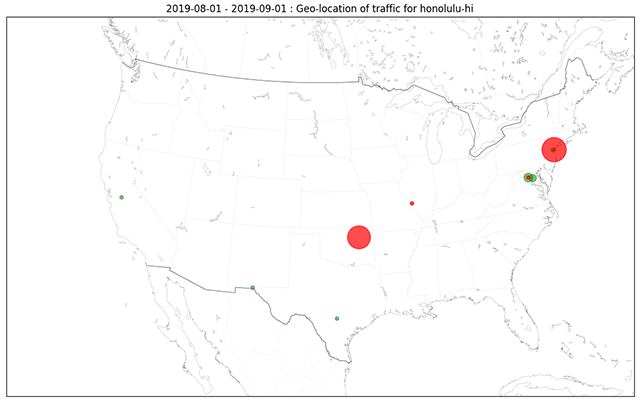 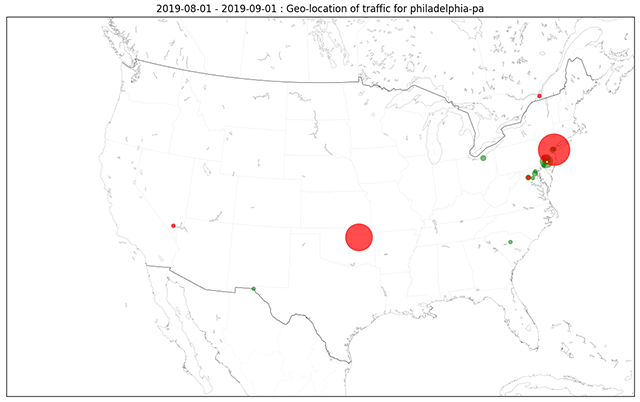 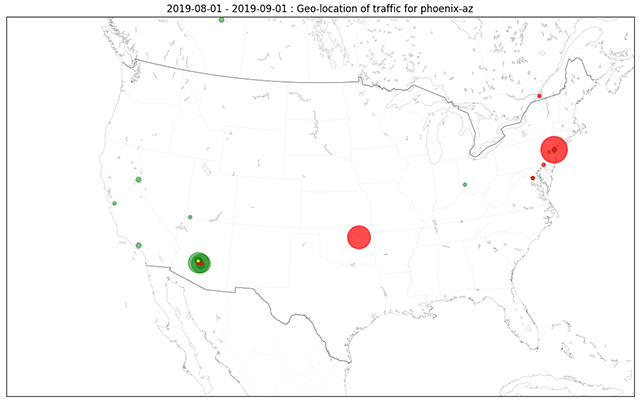 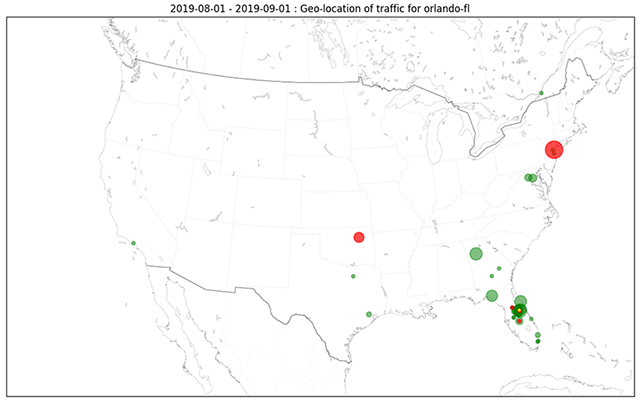 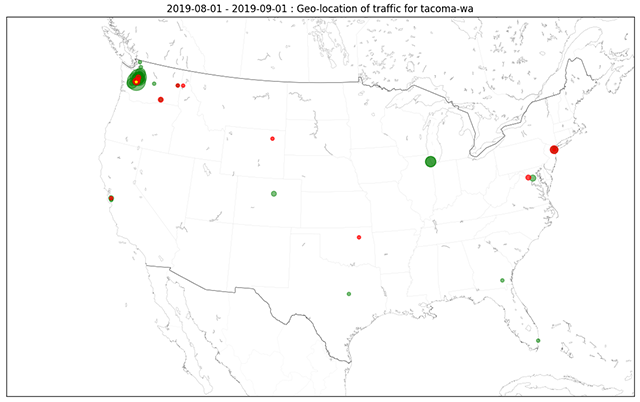 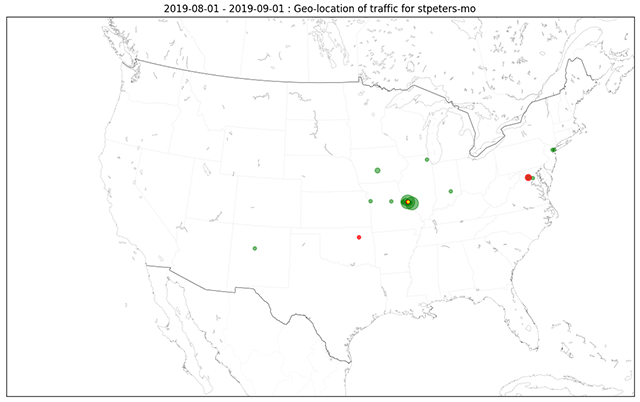 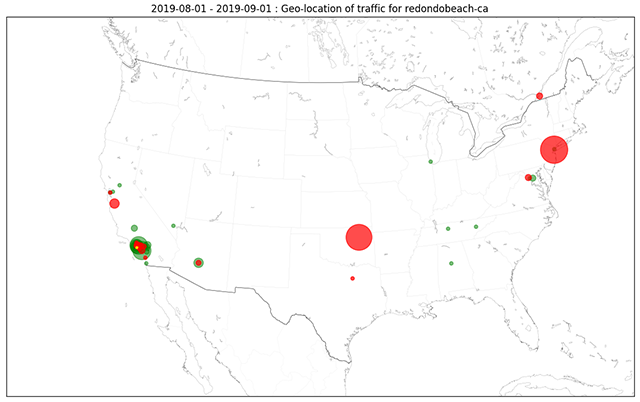 The map that stands out the most is the one for the Lexington, KY store. When someone searches for the product, this store is listed for potential customers from all over the country – and even all over the world. Seems like someone forgot to turn on the geolocation for this ad. Orlando is similar to Lexington except Orlando is affected by bots that come from two data centers. Philadelphia, Honolulu and Phoenix have huge amounts of bot traffic, with half of the traffic coming from outside the US. And the bot traffic from within the US is, here again, mainly from two data centers. The same data centers also show up prominently in the Redondo Beach map. Other maps show these data centers, as well, but not as much.

The maps for St. Peters and Tacoma show that most of their traffic originates from within their geographic area. These two examples do also have some traffic out of area, as well as search queries without the specific location coming from Chicago and New York. So, these locations might be affected as well once they become a target for bots.

What can you do?

There are three main takeaways here:

By using a bot detection solution that is able to detect both simple bots and advanced bots and excluding negative geographic regions, you will only pay for human traffic from within a 50 or 80 mile radius around the store. This will increase the average return per click and the overall performance of your campaigns. And, if you have bots in the double digits like what we saw here, that will clearly make a difference to your bottom line.

Want to join the discussion?
Feel free to contribute!

Insights on the Industry

Scroll to top
This site uses cookies to keep our sites reliable, secure and personalized. When you accept cookies, this helps make the site better by remembering your preferences, customizing content or ads, and enhancing your experience. You can read more about cookies here.OkRead more